NOTE: This guide does not take into account those whisky /companies-brands importing, ageing or blending foreign whiskies in Japan.
Nomimono
0
2733 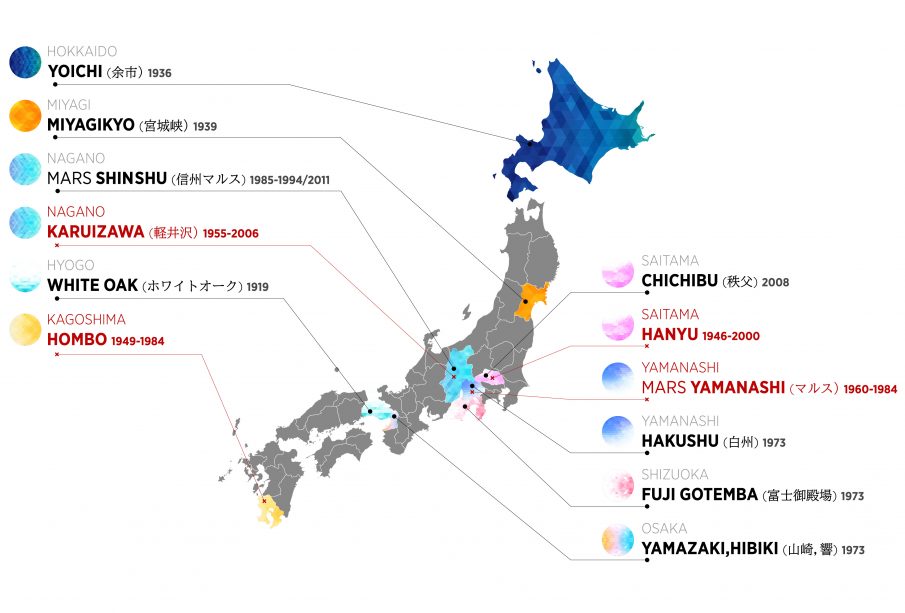 NOTE: This guide does not take into account those whisky companies importing, ageing or blending foreign whiskies in Japan.

Whisky production in Japan began around 1870, however commercially production was in 1924 with the opening of the country’s first distillery, Yamazaki. There are several companies now producing whisky in Japan, although the two most famous and most widely available are Suntory and Nikka and tend to be the trend setters.

Owned by NIKKA (ASAHI BREWERIES,LTD), and was opened in 1934. It is the older of the two distilleries owned by Nikka Whisky.

HISTORY
Masataka Taketsuru, the first Japanese who mastered whisky making in Scotland, had in mind bringing this culture and taste back to Japan and make his mind up in North Japan, where he could be surrounded by mountains and access to the main raw ingredients, water and barley, a very similar setting and operations as his days back in Scotland.

Owned by NIKKA (ASAHI BREWERIES,LTD), and was opened in 1969. It was the second distillery to be established by Nikka Whisky, after the company’s Yoichi distillery in Hokkaido.

HISTORY
Masataka Taketsuru was always eager to make his blends more complex by exploring a large variety of whiskies. In 1967 he discovered in the northern part of Japan another ideal site for a second distillery of his own, where two rivers with pristine water collide to be the source of water for the distillery.

Owned by Hombo group, founded in 1985, and mothballed from 1994 to 2011, moving locations from Yamanashi. Mars Shinshu Distillery is surrounded by beautiful and deep green forest at an altitude of 798m, is located in the clear air of silence at the foot of Komagatake, the considered “The Alps Japan” in Nagano Prefecture.

HISTORY
The history dates back to 1949 when the Shochu Distilling Hombo family in Kagoshima, owners of Mars Whisky, took a license to distil whisky, however it was not until 1960 when they started production after deciding to build a new distillery in Yamanashi (1960-1984).

The distillery was initially run by Kiichiro Iwai, who had been Masataka Taketsuru’s immediate superior who had sent Taketsuru to Scotland in 1919 to learn about whisky making skills.

In 1984, a different location in Nagano (considered The Japanese Alps) was set to build the new distillery, seeking slow ageing due to its high altitude, and the source of soft water. However, Japan’s economy collapse in early 90’ close the plant to later re-open in 2011.

HISTORY
The history of Eigashima Shuzo Co. Ltd, dates back to 1888 where mainly Shochu and Sake was their product lines, it is in 1919 they were the first Shochu distillery to obtain a Whisky making license.

The city of Akashi has been known for its clean air and water sources, and the distillery since its construction has been the only one by the seaside, overlooking the Seto inland sea.

Ownded by Venture Whisky and founded in 2004 by Ichiro Akuto, however did not operate until 2008, it was the first new Japanese distillery since 1973.

About 62 miles (100Km) from north west Tokyo, within the Saitama prefecture, the city of Chichibu settles near the Arakawa river, and with extreme changes of climate throughout the season it’s what makes Chichibu Distillery unique in its kind.

HISTORY
Ichiro Akuto, a descendant from the well-known Akuto family, which once owned the famous Hanyu Distillery, known for its one-of-a-kind whiskies.

Whisky making runs through Ichiro Akuto’s blood, so he decided to purchase in 2004 what was left over from the previous Hanyu distillery, and using his family’ knowledge and what he gained at Suntory to start producing his signature Whisky.

Venture whisky had the chance to rescue whiskies passed down from his family and also some aged stocks from the well-known Karuizawa and Kawasaki sister distilleries. However, these renowned whisky distilleries had closed down in 2006.

Owned by the Suntory group, Whisky-making at Hakushu Distillery is widely known for a variety of whiskies. Within the fermentation process, they use only high-quality heat preserving wooden washback’s, naturally occurring conditions in the distillery, hence this creates characteristic flavours unique to Hakushu.

HISTORY
This distillery was established in 1973, and expanded in 1981 aiming to create malt Whisky different than others form Yamazaki Distillery in Osaka, and decided Yamanashi prefecture, also known “The Southern Alps” of Japan was thought to be the best place for it.

Owned by the Kirin group, and holding the record of being the world’s largest whisky distillery, with an astonishing 1.7 million square feet plant, producing the large sum of over 12 million litres a year of Single and grain whiskies.

HISTORY
The Fuji-Gotemba distillery was founded in 1970, in what is considered Japan’s pinnacle of Japanese whisky making for the amount of whisky being made at the time. However, production did not start until 1973.

This multi-national venture collaboration saw, Seagram, Chivas, Four Roses join forces with Kirin, and chose an area with similar climate as Scotland to settle their nest, at the town of Gotemba in Shizuoka prefecture, right at the foot and Japan’s beloved Mount Fuji.

In 2002 Kirin became the sole owner of the distillery.

Owned by the Suntory group, Whisky-making at Yamazaki Distillery in south western Kyoto, right at the foot of Mt.Tennozan makes great conditions for the whisky making process, due to its natural surrounding areas, with pristine groundwater water sources where the rivers Katsura Uji and Kizu collides.

HISTORY
In 1923, Suntory’s founder, Shinjiro Torii set himself the target of creating a whisky distillery to create the perfect whisky to reflect the nature of Japan and Japanese Craftmanship,

In the late 20’ early 30’ the demand for whisky was still very low, this helped Shinjiro Tirii to build aged stocks to later in 1937 launch their superior brand Kakubin.

It was when with Shinchiro Torii’s son taking over the reigns of the Suntory group, when he decided the distillery had all it took to start producing single malt whisky, and that’s how their iconic Yamazaki brand was born.