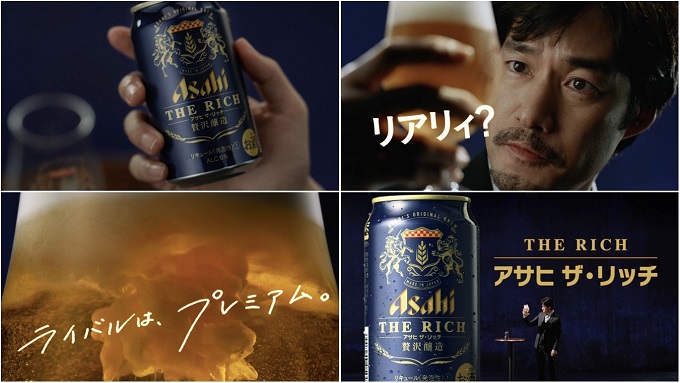 When I started shooting the scenery, I was showing concentrated expressions in the scenes of picking up the product and staring at the product. In the scene where I had to taste “Asahi The Rich” I was really surprised by the taste. The whole studio was drawn into Takenouchi’s acting with a particularly impressive expression.

“Asahi The Rich” is a new genre developed with the aim of “quality and luxury like premium beer”. Raw materials are hand-picked, and the concentration of raw wort extract is one of the largest. Using some of the finest fine aroma hops Saaz from Czech Replublic, it is finished with a refreshing aroma and a well-balanced flavour that is easy to match with your meal.

In the brewing preparation process, Asahi Breweries  said they have adopted a new Patent pending boiling method for the first time. In traditional beer brewing, it is common to continue injecting steam for more than one hour during the preparation process for sterilization and boil at a temperature of about 100 ° C.

we have achieved both sufficient sterilization and the assurance of a rich aroma of wheat. You can enjoy a rich flavor that has never existed before.

However, this method had the problem of reducing the strong and rich wheat aroma derived from freshly ground malt. This time, using the “micro-boiling method”, which minimizes the time to inject steam  is used for boiling, steam is injected for only a few minutes in total at the start and end of boiling. By keeping the temperature during boiling at about 100 ° C and controlling the steam injection time in minutes, Asahi Group said “we  have achieved both sufficient sterilization and the assurance of a rich aroma of wheat. You can enjoy a rich flavor that has never existed before”